My little brother married the love of his life yesterday!  I couldn't happier for them! 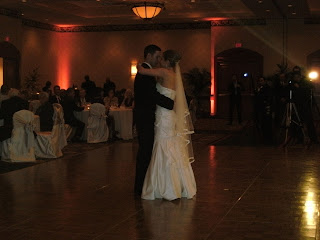 The following was my toast to them at the rehearsal dinner:

Blake (or Greg as you're called now),
When I was seven years old, my “only child” status was ripped away! I didn't want a little sister and God saw fit to give me a brother.  I was thrilled! From the time you were born, I made it my mission to protect you. Nothing or no one would hurt you – I made sure. As long as you were in earshot, I was paying attention. When you were a little boy, at the first sign of a loose dog, I could hear you scream, “SISSYYYYYY!!!!!!”, and I was off and running! Thankfully I was much quicker back then:)

You have taken many laps around the block on my handlebars – and many trips down Broadway, ducking down in my backseat so no one could see you (at my request!). You endured many forms of torture – most in fun and most involving a curling iron and hairspray. (I need to take this opportunity to publicly apologize for that!) You have always made friends easily and had many of them. You were never a follower, but stood out among them as a leader. From early on, however, it was clear that you would NOT be taking the first girl that came along! At twelve years old, girls began calling to see what the “math assignment” was, only to be hung up on for not listening in class:) You simply would not be bothered by such immaturity!

I can't begin to tell you how proud I am to be your sister. You are no longer a “pesty” little brother, but a close friend. The life you live is a reflection of the quality of your character. You are focused, you know what you want, you work hard and enjoy life – the only thing that was missing was someone to enjoy life with.

Glen and I knew from the moment we met you that you were the perfect fit for Greg – and we loved you! You are positive and fun and easy to talk to and comfortable to laugh with. I am thrilled to be gaining a sister! I'm looking forward to many shopping trips, telephone calls and holidays around the table!  I can see that you love my brother – and I know he'll be safe with you.

Though marriage is wonderful, God uses us to help refine one another and draw us closer to each other and ultimately to Him. Know that refinement isn't always easy, but always worth the hard work!

Congratulations! We love you both and are praying God's best blessings for you! No one is cheering you on more than us!

If you didn't grow up with us, this probably didn't make much sense to you, but if you did, you know that when we were little, we were never apart.  Until I left home, I was definitely his caretaker:)

It's wonderful to see them so happy!  The wedding was beautiful and fun - just like the bride and groom!  Still in Chicago, but headed home this week.  I'll try to post more about the wedding later.

﻿
Posted by Mindy at 9:51 PM No comments: Links to this post

On This Day in Christian History, by Robert J. Morgan.

I knew when I ordered this book that it was divided into 365 daily devotions, but was pleasantly surprised with the content.  I'm not much of a history buff, but am finding that the longer I'm a Christian, the more interested I become in Christian history.  Not only are there daily devotions, there is a topical index in the back to point to a specific devotion.  I can look for devotions that talk specifically about peace or perseverance, and many other topics.  I am considering incorporating these facts in my kids' homeschool lessons - possibly as topic starters for writing assignments.  It's definitely not a replacement for in-depth Bible study, but I don't believe it was written for that purpose.  For a quick time of reflection, or neat, new information about Christian history, I definitely recommend this book.

I received this book for free from Booksneeze.com, with an agreement that I would give an honest review. If you're willing to blog your review of Christian books, go to http://www.booksneeze.com/ and register!
Blessings,

Glen and I try to "pray without ceasing" concerning our kids.  Since before we began to homeschool, we have prayed about their education and which route to take.  God had laid homeschool on our hearts long before He led us to it.  They went to Christian school for several years before God called us to homeschool.  Every year, we have tried to make sure we're listening for God's voice where their education is concerned.  Are we homeschooling because we're called to it, or because it's the habit we're in now and we don't want to change what we're doing?  Each year we have heard God say, "Yes!  Homeschool!".  Without a doubt, it has been His plan.  This year however, we have had questions since the beginning of the year.  Not for both kids, but for our daughter.  She'll be in ninth grade next year and we have felt it would be a good time for her to go back - if it's God's plan.  Everything I have read says your high schooler must be in agreement to continue homeschooling through high school.  That makes sense.  School is not an option, but they should start getting some input about how they are schooled.  I just knew, given the choice, she'd pick school.  She's SO social!  She would also have the option of competing in sports and music competitions - which are important to her.  My immediate response was "NO!".  I cherish the time we spend together.  I love that I am her biggest influence (some days, admittedly not the best influence, however!)  My second reaction was to keep my feelings to myself.  If I told Glen, I was afraid he would jump on the opportunity before I could give my input (in case you didn't know, I'm a recovering control-freak!), and if I told Grayson, she would definitely jump on the opportunity to spend more time with friends and less time with me!

After several days of feeling like I needed to talk to Glen (funny how God does this), I was relieved to know he was having the same feelings.  Relieved and stressed out all at the same time.  Relieved that I wasn't crazy, stressed that I may have to send her.  We agreed to pray about it the rest of the year, then see where we are at the end of the school year.  Neither one would ask Grayson's opinion for now - after all, we're the parents (and I already knew her answer!).  Within a few weeks, we had both broken the agreement.  While talking with her, I felt there was an opening in the conversation where I could ask without it being a major ordeal.  I simply said, "Daddy and I are praying about whether we'll keep homeschooling you next year.  What d'ya think?"  She said, "I don't know".  I don't know?  She didn't jump at the chance to bust out of this joint?  I dropped it, but talked to Glen the next day.  Apparently the same kind of opening had come up in a conversation he had with her!  She gave him more information, though (yes, I'm totally jealous!).  She told him she was afraid that if she went to school, she'd lose her homeschooled friends.  Wow.  That's when it hit me.

I have grown very close to the moms in our homeschool co-op.  They are some of the best women I know - committed to Christ and to homeschooling.  I can call any of them or shoot them an email asking for prayer, and I know without a doubt they've got my back.  They are encouragers and a support system that I've so needed and drawn from as I've homeschooled my kids these last four years.  I began to realize that part of the reason I don't want her to go to school is because it may eventually lead to Riley going to school.....which would end our homeschool co-op days with other homeschool families.  These are times I treasure.  I know these ladies will always be friends, but I wouldn't spend as much time with them.  I definitely have to take "me" out of the equation.  "I" want more time with her, "I" want us to spend time with these families - but what does God want for our family?  There was definitely something to what Grayson said.  Will she lose her friends?  Probably not.  But will she spend alot less time with them?  Definitely!

I'm realizing that even at thirteen, she gives this decision more thought than I originally gave her credit for.  I still won't let her make the decision - that will be ours to make - by God's leading, but I'm considering her input to be much more valuable than I thought it would.  God will definitely use her to help reveal His will to us!

For now I'll just be faithful to pray....and trust that He will work all things for His good and for ours.
Blessings,

Posted by Mindy at 10:31 PM No comments: Links to this post